I sometimes get asked to test out educational websites, software and apps. One such recent request was for an online platform which is redefining how we access education publications.

Education Umbrella is an online platform which gives its users access to a wide range of books: from self-help books on how to support children with primary maths to teacher training books on language education. 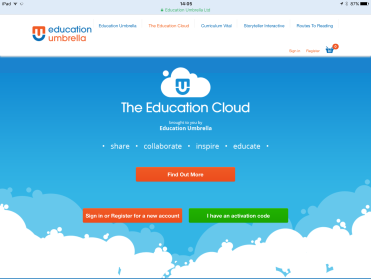 The idea of an online store is nothing new – Kindle and iTunes have been providing electronic access to books for nearly a decade now. However, what sets Education Umbrella apart from the rest is the cost factor. Unlike other providers, where you have to pay the publisher however much they charge for the book, at Education Umbrella you pay to “access the book” for a year. What’s more, the access fees are really low – some as little as 99p for a year.

The people at Education Umbrella have really caught on to the zeitgeist of the youngest generation and acknowledged that, unlike in their parent’s day, the millenials don’t feel the need to own everything – they just need access to it.

It seems with this platform that the access-only trend, such as with Spotify and Netflix, has at long last reached the education sector. Even Apple has started providing a streaming service, which definitely means it is high time the education sector joined in, too.

Apple’s late CEO, Steve Jobs, claimed that iTunes was the answer to music piracy. Where iTunes might have helped reduced piracy among those who can afford it, you could go as far as to say Education Umbrella is the solution to printing piracy among educators. Its low cost access to books means teachers won’t have any excuse for finding a pirate PDF of the publication they are after when they can get a year’s access to it for as little as 99p.

The only drawback to the service is the publications which aren’t currently available on it. However, I imagine as it grows in popularity, the number of publishers making their books available will grow and grow.

This is an amazing service which gives educators and readers alike access to a breadth of tomes. At such a small cost and with such forward thinking, Education Umbrella is the future of education publishing.

Tell us what you think... Cancel reply